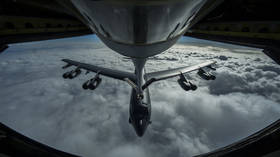 .
The Pentagon document laying out the US doctrine of nuclear operations was publicly available for about a week, then made ‘official use only.’ What’s inside is a chilling reminder that Washington sees nuclear war as winnable.

“Nuclear Operations,” or Joint Publication 3-72, was dated on June 11 and made private since, but not before it was downloaded by Steven Aftergood, an activist at the Federation of American Scientists (FAS). It is currently available on the FAS website as a PDF.

The publication “provides fundamental principles and guidance to plan, execute, and assess nuclear operations.” The rest of it is in the same matter-of-fact tone, even when discussing practical consideration of potentially world-ending weapons.

“That kind of thinking itself can be hazardous. It can make that sort of eventuality more likely instead of deterring it,” Aftergood told the Guardian on Wednesday.

Arguably, the US military’s job is to consider all possibilities, and the decision whether to use nuclear weapons is ultimately in civilian hands – in this case, those of President Donald Trump.

The Trump administration has paid a lot of attention to nuclear matters, updating the US Nuclear Posture Review last year and earmarking funds for modernizing the US “nuclear triad”: bombers, land-based missiles and submarines. However, Trump has also announced the US would leave the 1987 Intermediate-range Nuclear Forces (INF) treaty with Russia by next month. The fate of the New START arms control treaty with Russia, set to expire in February 2021, is very much up in the air.

In such circumstances, the Joint Chiefs doctrine stating that “Using nuclear weapons could create conditions for decisive results and the restoration of strategic stability,” might be taken as a cause for alarm, and with good reason.

The document also describes nuclear bombers as offering “the greatest degree of flexibility in the triad because they can be a highly visible sign of resolve and, once ordered to conduct a nuclear strike, are recallable.” It’s a dry, factual statement, but when coupled with the presence of B-52 strategic bombers on Russian borders earlier this week, it begins to sound like a threat.

Asked about the document, the Joint Chiefs of Staff said it was removed from public access “because it was determined that this publication, as is with other joint staff publications, should be for official use only.” There was no explanation as to how or why it was published in the first place, whether it was a mistake or a deliberate message to other governments.

Back in April, Trump made comments about “getting rid” of nuclear weapons altogether, and speculated about a major arms control treaty with Russia and China. Given his current trade war with Beijing and the continued hostility towards Russia driven at least in part by ‘Russiagate’ conspiracy theories at home, it is unclear whether such a treaty will ever go beyond hopes and dreams.

The US is the only country ever to use nuclear weapons in battle, against the Japanese cities of Hiroshima and Nagasaki in August 1945. Neither was a primarily military target.