Home » Uncategorized » Listen up: why some people can’t get enough of audiobooks – by Steven Poole (Guardian) 13 July 2019

In this time-poor, podcast-friendly world, audiobooks are booming. So what is the science behind them – and do they change our relationship with the written word?

Are audiobooks the new… books? It was recently revealed that audiobook sales rocketed by 43% in 2018, while those of print books declined (by 5%) for the first time in five years. Can people no longer be bothered to read for themselves? Is this, rather than the ebook, the harbinger of the slow death of print, about which we have been warned for so long? And if so, what does that mean for literary culture? Let us first retain some historical perspective by noting that Homer’s Iliad was essentially an audiobook before it was ever written down. Oral literary culture long precedes the book and there are many reasons for its rising popularity. Some people I spoke to use audiobooks to send them to sleep after a stressful professional day; others listen while walking, or looking after a baby, or as an alternative to TV. Parents say they are great for keeping children occupied in the car, and commuters use them on their journeys. The time-pressed listen at 1.5x or 2x normal speed, or use websites such as Blinkist, which boil down non-fiction books to their “key takeaways” in 15 minutes. One writer told me that he gets audiobooks “for research into stuff that I fear my pleasure-seeking brain would give up on if I had to read with my eyes”.

It may be that an actor’s voice can provide musical information that helps longer-term recall, just as the visual information of a book can

But is there really a measurable difference between reading with the eyes and “reading” with the ears? According to an oft-cited 2016 study (Beth A Rogowsky et al), 91 subjects were found to display no significant difference in either comprehension or recall after two weeks whether they had read a non‑fiction passage or listened to it, or done both simultaneously. However, this investigation used ebooks for the reading part, and other studies have suggested that reading comprehension and recall is lower for reading on screens versus print. Since the 1980s, cognitive psychology has consistently established that recall is indeed better after reading (printed) text instead of listening to it, a conclusion bolstered by a 2010 study (David B Daniel and William Douglas Woody), which found that students did worse on a test if they had listened to a podcast of a scientific article on child cognition rather than reading it.

Books have the advantage that you can rapidly re‑scan a sentence visually if you didn’t take it in the first time; and you can mark passages in pencil or turn down page corners to mark specific places to return to. Audiobooks, by contrast, exploit our “echoic memory”, which is the process by which sound information is stored for up to four seconds while we wait for the next sounds to make sense of the whole. Nor can audiobooks reproduce one of the most thrilling features of print, which is its creative ambiguity: the line of poetry, or the sentence, that is exquisitely balanced between two possible meanings. The actor in the studio has to choose just one, and that is the one that is forced on the reader. In their favour, it might be that the particular cadences and timbre of an actor’s voice in audiobooks provide musical information that helps longer-term recall, just as the visual and tactile information of where a passage lies in a printed book can.

That voice is everything, says Jennifer Howard, founding director of the boutique audio studio Sound Understanding, whose recent productions include Samuel West reading astronomer royal Martin Rees’s On the Future for Princeton University Press. “Casting the right voice is crucial,” she says. “Get it wrong and you can really turn the listener off.” And non-fiction is even more demanding than fiction. “In a non-fiction book, the reader must understand and be interested in what they are reading, because comprehension can’t be disguised with vocal tricks and the light and shade of characterisation. So in addition to actors, we work with a lot of broadcasters. They understand complex political or socio-economic subjects and instinctively know when, where, and how much stress to place on a particular point.”

The UK’s leading audiobook retailer, Audible, whose customers downloaded more than 3bn hours of material last year, is getting into the “original audiobook” game, having commissioned the likes of Michael Lewis and Jon Ronson to write exclusive direct-to-audiobook stories or “shortform books”. One of their earliest signings was Philip Pullman, who in 2015 wrote a 32-minute short story set in the universe of His Dark Materials, “The Collectors”, saying that he was attracted by “the idea of writing for a voice” instead of a reader. (Audible itself explained that the idea was “not only a way to please current members, but also to bring in new listeners”.) But if an “audiobook” was never a book in the first place, can it really be called a book? Surely it is just a rebadged radio drama, documentary, or podcast, even if it goes on to be bookified. (Pullman’s “The Collectors” subsequently came out as a Kindle Single.) Indeed, the surge in audiobook sales seems very likely to be a halo effect of the huge popularity of podcasts, especially the single-theme longform series such as NPR’s breakout Serial, first released in October 2014, or ABC’s 2019 The Dropout, a jaw-dropping investigation into the story of Elizabeth Holmes and her blood-testing tech company Theranos.

If audiobooks are now gaining ground on print, does that indicate we are trying to do more in less time? Although the data suggests that we do not actually feel any more rushed or hurried than a few decades ago, the increasingly fragmented nature of our media consumption, and the perceived mountain of tasks ahead of us in any given day, might be driving people to try to cram in more nutritious brain-fare by multitasking: “reading” an audiobook while doing something else. “The pessimist in me says that in our ‘always on’ world, the disinclination to read is not due to lack of desire, but lack of time,” Howard says. Unfortunately, the science is quite clear that, apart perhaps for a small minority of people, we simply can’t “multitask” at all: when we think we are multitasking, we are really just switching attention from one thing to another in short bursts, a process that is in itself exhausting. And educational psychologists are firm that attempting to multitask harms learning. So listening to an audiobook while driving, or gardening, might be a very enjoyable experience, but we won’t absorb as much. Yet that is still better than absorbing nothing at all. “The optimist in me,” Howard adds, “says that human beings will always seek out new stories and ideas and we should celebrate the fact that there are now so many ways to access them.”

A more peculiar problem of audiobooks is that a user whose library of such material is locked into, say, Audible’s proprietary format – which cannot legally be converted into something more accessible such as MP3 – might face unwelcome surprises in the future. Earlier this year, Microsoft closed down its ebook store and informed previous purchasers that all the books they had bought in its own proprietary format would henceforth stop working. This is certainly a kind of innovation: when you buy an actual book, you are not dependent on the benevolence – or even just the survival – of a single corporation in order to continue being able to read it whenever you want. Audible, which has been criticised for practices around charging after its free subscription trials, and the unexpected expiration of book credits, declined to provide any comment for this article. But we do know that the biggest audiobook producer and retailer is part of Amazon, the rapacious 500lb gorilla of the book trade. It would not take a tinfoil-hat-wearing conspiracist to suppose that its primary goals lay somewhere other than the championing of literature and storytelling for its own sake. 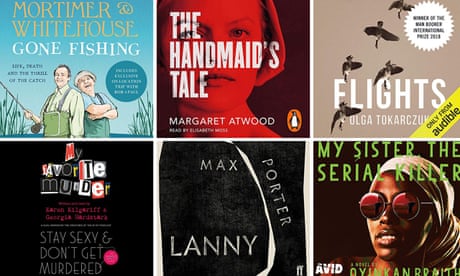 The mood in publishing seems to be that audiobooks are not cannibalising print sales to any large degree yet; more likely they are competing with podcasts, music and television as a more passive but still semi-highbrow entertainment experience. Drummond Moir, a publisher at Ebury Press, says of the audio challenge: “I think we can and should be sanguine about it. Just as publishers harnessed ebooks as yet another format alongside hardbacks and paperbacks, audiobooks can be thought of as yet another way of connecting readers and authors. In non-fiction, especially, we’re seeing audiobooks really register with people who may not have the time or inclination to pick up a print book, but devour audiobooks because they are hungry for new ideas, narratives and experiences. If it helps more people experience an author’s work, it’s something to celebrate.” To which even the grouchiest prosophile writer can only respond: hear, hear.

2 thoughts on “Listen up: why some people can’t get enough of audiobooks – by Steven Poole (Guardian) 13 July 2019”