China’s military on Wednesday published a video containing a clip of what appeared to be the launch of a new type of supersonic cruise missile, only to withdraw the film and replace it with a version with that scene trimmed out.

The original footage, which ran for just over a minute, was released on social media by the People’s Liberation Army Rocket Force as part of the celebrations for the 70th anniversary of the founding of the

, which falls on Tuesday.

The film contained a two-second clip in which an unidentified missile with an unusual design is seen being fired from a launcher truck. However, in the later version, the scene is replaced with footage of two separate missile launches in a desert setting.

The editing did not go unnoticed by China’s military observers, several of whom suggested that the weapon in the original film might have been a never-before-seen supersonic cruise missile.

In the clip the missile appears to have slim dorsal fins, foldable tail fins and additional propellant, all of which, according to one expert who asked not to be identified, suggests it is designed to fly long distances and faster than the speed of sound.

The PLA already has a land-attack subsonic cruise missile – the Changjian-10 – that has an operational range of more than 1,500km (932 miles), which is equivalent to that of a medium-range ballistic missile.

Ballistic and cruise missiles differ in a number of ways but the latter tend to fly at lower altitudes and at slower speeds, making them more vulnerable to defence systems.

However, the Rocket Force has made significant progress in the development of glider vehicles for its ballistic missiles, like the Dongfeng-17 (DF-17), which is now capable of gliding in outer atmosphere at upwards of five times the speed of sound, making it more able to evade missile defence systems.

“Now that the DF-17’s glider technology is becoming more mature it could be used elsewhere. Other missiles, like this cruise missile [in the video clip], could also adopt similar vehicles to carry the warhead,” the source said.

The missile in the original footage also appeared to be fitted with several unidentified items of kit, which a second observer, who also asked not to be identified, said might be jamming and anti-jamming devices.

“These would enhance the missile’s ability to avoid electronic interference or guided interception by enemy missile defence systems, and therefore increase its chances of penetration,” he said.

China’s missiles are likely to be a big feature of the military parade that will take place on Tuesday in Beijing, with several of them going on display to the public for the very first time. 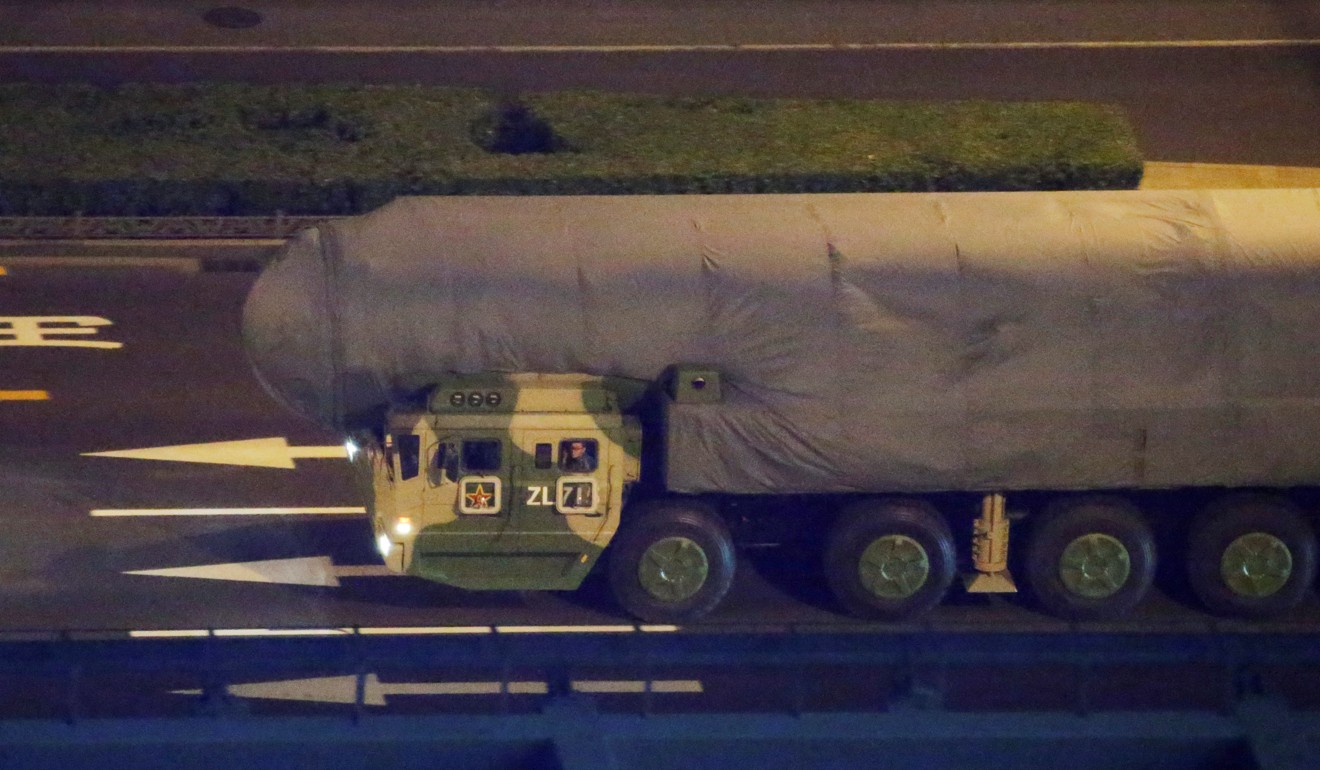 A military vehicle carrying DF-41 intercontinental ballistic missile (ICBM) travels through Beijing on September 14 in a rehearsal for the military parade.

that is capable of carrying 10 nuclear warheads and has the range to strike any point on the US mainland. It remains to be seen if the mystery supersonic cruise missile will be among them.

, who also chairs the Central Military Commission, will officiate the day’s events, which will also feature 15,000 troops from 59 units, more than 160 aircraft and 580 active weapon systems.

In 1949, then Communist Party chairman Mao Zedong was guest of honour at a military parade to declare the founding of the People’s Republic of China.

While there were more troops on hand that day – about 19,000 in total – there was significantly less military hardware, with just 17 aircraft taking part in the fly-past. Nine of them even did two laps to make the air force look bigger than it actually was.