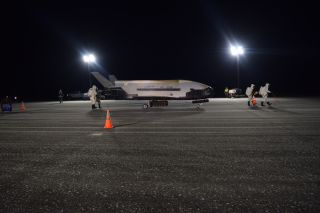 The U.S. Air Force’s unpiloted X-37B space plane landed back on Earth Sunday (Oct. 27) after a record 780 days in orbit , racking up the fifth ultra-long mission for the military’s mini-shuttle fleet.

With the successful landing, OTV-5 broke the previous X-37B mission record of 718 days set by the OTV-4 mission in May 2017. OTV-5 is the second X-37B mission to land at NASA’s Shuttle Landing Facility (OTV-4 was the first), with previous missions landing at Vandenberg Air Force Base in California.

“The safe return of this spacecraft, after breaking its own endurance record, is the result of the innovative partnership between Government and Industry,” Air Force Chief of Staff Gen. David L. Goldfein said in a statement. “The sky is no longer the limit for the Air Force and, if Congress approves, the U.S. Space Force.”

The U.S. Air Force has at least two reusable X-37B spacecraft in its fleet, and both have flown multiple flights. The solar-powered space planes were built by Boeing and feature a miniature payload bay to host experiments or smaller satellites. They were originally designed to spend up to 240 days in orbit.

“The X-37B continues to demonstrate the importance of a reusable spaceplane,” said Secretary of the Air Force Barbara Barrett said in the same statement. “Each successive mission advances our nation’s space capabilities.”

Air Force officials have said that the exact nature of X-37B missions are classified, though they have dropped hints about the types of experiments OTV-5 performed in orbit. One payload was the Air Force Research Laboratory Advanced Structurally Embedded Thermal Spreader, an experiment designed to “test experimental electronics and oscillating heat pipe technologies in the long-duration space environment,” according to an Air Force statement.

“With a successful landing today, the X-37B completed its longest flight to date and successfully completed all mission objectives,” Randy Walden, Air Force Rapid Capabilities Office director, said in the statement. “This mission successfully hosted Air Force Research Laboratory experiments, among others, as well as providing a ride for small satellites.”

The X-37B space plane was originally developed by NASA in 1999 to serve as a technology test bed for future spacecraft and looks much like a miniature version of  a space shuttle. In 2004, the military’s Defense Advanced Research Agency (DARPA) took over the project, ultimately turning it over to the U.S. Air Force’s Rapid Capabilities Office a few years later.