Home » Uncategorized » Why $1bn box office for Star Wars: The Rise of Skywalker is a massive failure for Disney – by Zachary Leeman – 2 Jan 2020 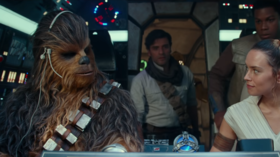 ©  Screenshot from trailer Star Wars: The Rise of Skywalker, Dir: J.J. Abrams, Lucasfilm, Disney, 2019 © Youtube / Star Wars
A predicted, $1 billion theatrical gross is a success for most franchises, but a lost opportunity for one-time cultural juggernaut Star Wars, which is leaning on fading nostalgia in the West, and being ignored elsewhere.

After just four years and five movies, Disney has driven George Lucas’ ‘Star Wars’ franchise – which survived the questionable prequels – into the ground.

Trending down at home

The box office receipts for J.J. Abrams’ ‘The Rise of Skywalker’ are the one proof numerous mainstream media defenders of the House of Mouse can’t spin, or blame on vague forces of inceldom and Russian hackers.‘Skywalker’ has currently brought in just under $400 million in the United States since being released on December 20. Sounds like a lot, right? Not these days. That domestic total means the movie is trailing the success of ‘Force Awakens,’ the film that kicked off this rebooted franchise, by more than $200 million.

To make matters worse, the film is petering out at the box office in a way no major Disney property should. In its second weekend, it dropped by about 60 percent. While that’s not the nearly 70 percent drop that ‘The Last Jedi’ did – the true turning point in the fandom relationship with the franchise – it’s starting from a lower base.

‘Skywalker’ may not even end up matching that movie’s box office success, which is disastrous when you consider the fact that ‘Last Jedi’ earned substantially less than 2015’s ‘Force Awakens.’The trend is clear – the more of the new saga people watched, the less they wanted to carry on watching.Where the collapse of Star Wars really becomes obvious, though, is in its worldwide box office receipts.

In a world where a vast majority of audiences prefer to stay home and stream and production budgets are skyrocketing – ‘Last Jedi’ reportedly cost over $300 million – worldwide ticket sales are more important than ever. China, the second biggest film market in the world, is especially essential for the success of major studio releases today. Many films even earn a majority of their gross from China theaters.

‘Skywalker,’ however, is even more irrelevant in China than it is in the United States. The film has completely fizzled out at the box office there after just two weeks. It earned $2 million in its second weekend, which accounted for less than three percent of China’s total screenings.Ticketing platform Maoyan has predicted the film will earn just $19.7 million in the country.

To put that number in perspective, ‘Force Awakens’ earned $126 million, and ‘Last Jedi’ earned $42.6. Even spinoff movie ‘Rogue One’ brought in $69.4 million in 2016.Viewing the films without the rose-tinted glasses, the Chinese rejected this shapeless mess of a story. And it’s not that the audiences there don’t get Hollywood films: the final ‘Avengers’ from the same studio released earlier last year, grossed a stunning $614 million.

Defenders of the reboot will point to the fact that ‘Skywalker’ will earn over a billion dollars at the box office as proof of its success – it’s earned nearly $800 million so far – but that milestone really doesn’t mean all that much in a world where Disney frequently races past that mark with their Marvel films and animated features like ‘Frozen II.’ A billion dollars is actually usually needed to barely break even on expensive fare like ‘Skywalker.’ And don’t talk merchandise sales – still no child wants a Rose Tico figurine.The mistakes in the new ‘Star Wars’ universe were pointed out early. The movies unapologetically banked on lame nostalgia, while introducing cardboard cutout new characters meant to do little more than appeal to woke social media mobs.

By the time ‘Last Jedi’ rolled around and audiences really began turning on the franchise, it was far too late to be saved. Now we have reached a point where Disney’s future with ‘Star Wars’ is one big question mark. The studio once prided itself on releasing one ‘Star Wars’-related movie a year, and planned to do so into the 2030s, but after just a few years, they now have no major ‘Star Wars’ properties in development — besides ‘Mandalorian’ and a few other Disney Plus ventures.

The new saga of films not only wore out audiences, but it seems to have worn out Disney as well, with the studio effectively admitting it has no idea what to do with the property it bought for $4 billion from Lucas in 2012. Having run out of excuses, even the critics have rounded on the final installment of the current trilogy, though there seems to be an attempt to shift the blame for the uninspired member berry pandering onto the much-abused loyal fans, who surely never asked for this film.

The problems lie deeper, and have still not been solved. Disney had no ‘Star Wars’ story to tell, and miscalculated in thinking anything related to the brand would be relevant just because of the name. In lieu of a narrative, the films were used as blank canvases to espouse progressive talking points, introduce half-baked post-modernist ideas and insult Lucas’ original works. And it all led to this: an irrelevant myth-souring trilogy with a finale people around the world prefer to complain about, rather than actually watch.