Home » Uncategorized » If you want Trump out of office, don’t support Biden – by Nathan Robinson (The Guardian) 4 Jan 2020

Supporters of Joe Biden are unlikely to be persuaded by most of the common criticisms. They know he can be rambling and unintelligible. They know his record is unimpressive and that he doesn’t really have “policy proposals”. None of this matters, though, because to them he has the most important quality of all: he can beat Donald Trump. Nothing you can say about the former vice-president’s record, platform or mental state matters next to the argument that he is the best hope Democrats have of getting Trump out of office. 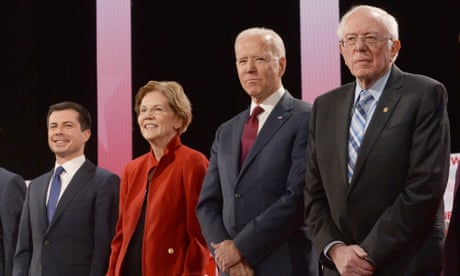 There’s just one problem: it’s a myth. It is a myth just as it was a myth that Hillary Clinton was a good candidate against Trump. Biden is not, in fact, the pragmatic choice. He would not beat Trump. He would lose. And we must say this over and over again. Forget his flubs. Forget his finger-nibbling.

Biden would be crushed by Trump. If you want Trump out of office, don’t support Biden.

Last time round, Clinton supporters lived in a strange kind of denial. Anyone could see she had unique vulnerabilities Trump could exploit. She was a Wall Street candidate, and he was running to “drain the swamp”. She was under investigation by the FBI, and his pitch was that Washington was corrupt. She had supported the catastrophic Iraq war, and he portrayed himself as an outsider opponent of those wars. Trump could “run to her left” and make criticisms she would be unable to respond to, because they were accurate. Clinton’s attempts to attack Trump as an out-of-touch, reckless billionaire sex criminal would fail, because Trump would point out that she herself was out of touch, bought by billionaires and had an unrepentant alleged sex criminal as her husband and chief campaign surrogate.

Joe Biden will face many of the same problems. He has been in Washington since the age of 30, representing Delaware, the “capital of corporate America”. He is infamous for his connections to the credit card industry, and he has lied about his degree of support for the Iraq war. Even Matthew Yglesias of Vox calls Biden the “Hillary Clinton of 2020” for his corporate ties and war support. It is worth remembering what being the “Hillary Clinton” of anything means in an election against Trump.

Consider the Ukraine scandal, which is far worse for Biden electorally than usually acknowledged. Democrats have made this the centerpiece of their impeachment case against Trump, setting aside Trump’s most consequential crimes in order to focus on the charge that Trump tried to force the Ukrainian government to investigate Joe and Hunter Biden. For Democrats, the scandal is clear-cut: Trump was abusing the power of his office to “damage a political rival”. And they believe that the American people will agree, and will be disturbed by Trump’s unethical behavior. They insist there was “no evidence” that Joe Biden did anything wrong, and that Trump and his associates have been unfairly trying to smear Biden.

Democrats who think this way are walking into a buzzsaw. Let us recall: Hunter Biden was paid up to $50,000 a month by a Ukrainian oil company. Officially, the chief Ukrainian prosecutor had an open investigation into that company. Joe Biden bragged about pressuring Ukraine to fire that prosecutor, which they did. Hunter Biden says he told his father about his position in Ukraine, and Joe Biden did not ask him to step down. Joe Biden contradicts his son’s story, saying they never discussed Hunter Biden’s “work” in Ukraine. One of them is not telling the truth.

If there are Joe Biden supporters in your life, you need to have serious conversations with them

Defenders of the Bidens like to point out that the prosecutor was fired for reasons that had absolutely nothing to do with Hunter Biden. In fact, there was widespread pressure to fire the prosecutor because he wasn’t doing enough on corruption investigations, and there was a consensus among experts that this was the case. Biden’s actions had absolutely nothing to do with his son and it is ridiculous to suggest that they did.

All this is true. But the important question is: does it sound good? And the answer is: no. It sounds terrible.

One reason Democrats are bad at politics is that they concern themselves too much with facts and not enough with impressions. With Clinton’s “emails scandal”, they tried to show Clinton had not technically violated the law, but having Barack Obama’s FBI actively investigating Clinton for possible criminal wrongdoing looked terrible regardless of the facts.

Left-leaning journalists and pundits love to “fact-check” Trump, as if proving that he has lied is in itself persuasive. But 2016 should have showed us how powerless “debunking” is next to “optics”. If you have a Democratic candidate who looks really corrupt, it doesn’t matter if they’re not. People don’t trust the press and they don’t trust politicians.

Imagine Biden running against Trump. Trump will run ads like this, over and over.

Good luck responding. Remember that time you have to spend defending yourself against Trump’s accusations is time not spent talking about issues that affect people’s lives. And Biden has already shown little interest in drawing people’s attention to the areas where Democrats should run strong against Trump, such as healthcare, taxation, working conditions and the climate crisis. 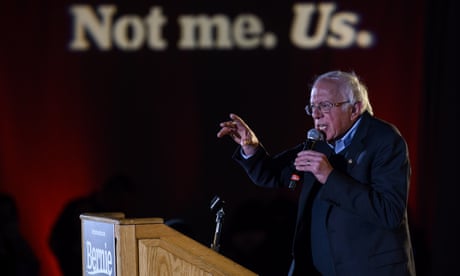 His slogan is “no malarkey”, but since Biden himself is a longtime spewer of malarkey, Trump will successfully paint Biden as a hypocrite. Biden’s central case is that he is “not Trump”, that he will return the country to virtuousness and decency. But if Biden doesn’t actually look virtuous and decent – because he isn’t – the argument that he has made for himself collapses completely.

Biden does have some strengths against Trump that Clinton did not. We mock his his rambling and tendency for “gaffes”, but these do mean he never sounds like a “scripted politician”. Clinton was criticized as robotic and focus-grouped. Biden is anything but focus-grouped; whatever pops into his head comes out his mouth.

At the same time, compared to Trump, Biden has:

Ask yourself: how likely is such a candidate to win? Is such a person really the one you want to run against Trump? Look at the enthusiasm Trump gets at his rallies. It is real. Trump has fans, and they’re highly motivated. How motivated are Biden’s “fans”? Is Biden going to fill stadiums? Are people going to crisscross the country knocking on doors for him? Say what you want about Clinton, but there were some truly committed Clinton fans, and she had a powerful base of support. By comparison, Biden looks weak, and Trump is savagely effective at preying on and destroying establishment politicians.

Complicated factchecks that attempt to explain the nuances of the Ukrainian criminal prosecution system will not help Biden. People’s already limited enthusiasm for Biden will further wane, and Trump will point to his “strong economy” and “job creation” as evidence Obama and Biden were weak failures. Biden will look tired and irrelevant, and possibly forget why he is even running in the first place. Trump will be re-elected comfortably.

If there are Biden supporters in your life, you need to have serious conversations with them. Do not dwell on things that do not matter to them, like Biden’s record on bussing, or his latest nonsensical comment. Instead, keep the focus on the main argument that is sustaining his campaign: the idea that he is the best candidate to beat Trump. He isn’t. His electability is a myth, and when we look honestly at the facts we can see that Biden is actually a dangerously poor candidate to run.